For this series of posts I have used extensively the book Swift Apprentice by Ray Wenderlich.
I strongly suggest this book, because if you buy the digital copy, Ray Wenderlich guarantees updates for the rest of the life!

I have also to say that Ray Wenderlich offers a cheat sheet available for download for free.

The purpose of these post is not to copy the book itself, that I strongly suggest to read, also doing the suggested exercises, that give the required confidence to really learn the language.
In particular I will not explain how to use Xcode or the playgrounds. The idea is that you buy the book and read it!

Final note: my background is deep experience in C#, so maybe some concepts are obvious for me. If you read this article, find it useful, but would like that I add something, don't hesitate to comment here below! But remember, my goal is not to copy the book :-)

You can also add methods to structs.
Methods are also accessed with ".".

Structures are value types, i.e. its instances are copied on assignment.

Conforming to a protocol

Structures can conform to zero, one or more protocols.

Stored properties are declared with let or var.
They are automatically added to the initializer created by Swift.

You can have a property with a default value:

Computed properties must be declared as a variable and must include a type:

It's possible to have both getter and setter (in the setter the new value variable is called newValue):

Note that set-only properties are not allowed.

They are static properties, and can be accessed only by the type:

As they are not called during initialization, in practice they are useful only for variable properties, but not for constant properties.

Lazy properties are stored properties, whose value is not calculated during initialization, but only after the first use:

self points to the current instance.

Initializers are special methods called to create a new instance.
They omit the func keyword and they don't have a return value.

Initializers must ensure all properties are set before the instance is ready to use.
If you add a custom initializer to a structure, you loose the automatic initializer.

Methods in structures can't change the values of properties without being marked as mutating:

For example, this will prevent the compiler to call this method on constants.

They are static functions:

Adding to an existing structure with extensions

It's possible to add methods to existing structures, even when their source code is not available:

A class is very similar to a struct, but it doesn't provide a memberwise initializer automatically, so you need to initialize all fields explicitly:

While structures are values types, classes are reference types.

The == operator checks if two values are equal.
The === operator compares the memory address of the two references.

With reference types, the value is a reference to an instance.
So you can't re-assign it to another instance, but you can indeed change the referenced object.

Extending a class using an extension

as operator is used to treat a property or variable to another type:

as? can be used with let guards:

super points to the nearest base class of the current class.

It's also possible to mark single methods with final:

Initializers in subclasses are required to call super.init in their initializers before they leave:

You can define an initializer as required:

So in a derived class, now you still must provide this initializer:

A deinitializer is a special method that is run when the object reference count reaches zero, just before it is removed from memory:

deinit isn't required and is automatically invoked by Swift.

In case you have two object referencing to each other, they would not get freed.

It's also possible to write all values on a single line, comma separated:

Deciphering an enumeration in a function

You can use the enum in a switch:

By default enums are not backed by integers, but it's possible to add it:

and it's possible to give an initial value different from 0:

Initializing with the raw value

Initializing with the raw value gives an optional because the raw value could miss.
If you're sure that the value is allowed, you can force unwrap the optional:

You can also have a raw value of type string, so the conversion to string is done automatically with rawValue.
Note also that you can add a property to an enum:

It's also possible to give other string values explicitly:

They let to associate a custom value (or values) to each enumeration case.
The number and types of the associated values can be different between cases.
You can't have both raw values and associated values for the same enum.

Another example with http verbs:

Iterating through all cases

To be allowed to iterate through all cases, the enum must conform to the CaseIterable protocol:

If you need to create a namespace to host a group of related methods, you can use enum so that you can't create an instance of it:

Optionals are in reality enumerations with two cases:

In reality Swift hides the enum:

A protocol doesn't contain any implementation and can't be instantiated.

A class adopting a protocol must implement its methods:

Structs and enumerations can also conform to protocols.

To provide a default value, you must define both versions of the method explicitly:

You can also define properties in a protocol, without specifying if they are stored or computed (only get/set is provided):

Protocols can't be initialized, but can declare initializers that the conforming types should have:

The conforming type will need to declare the initializers with the required keyword:

You can declare a protocol inheriting from another protocol:

You can add an associated type as a protocol member.

A class can only inherit from anther class, but can conform to multiple protocols.

You can declare a function parameter as conforming to multiple protocols:

You can also adopt protocols using extensions.
The example below adds the Reflective protocol to the String class, even you don't have its source codes:

You can also add a protocol adoption via extension:

So if you want to remove the Vehicle protocol from AnotherBike, you simply remove the extension.

How to require that a protocol is adopted only by reference types:

If you define a class, you can't compare two instances with ==:

To use the == operator, you must conform to the Equatable protocol:

Note that Self with capital letter means the type of the current instance.

So we can add it to the previous class:

Comparable is a subprotocol of Equatable:

In reality it is enough to implement only the < operator, because the others are provided by the standard library:

If your class conforms to the Comparable protocol, you get additional functions on arrays:

Hashable is a subprotocol of Equatable and is required for any type used as a Dictionary key (generated automatically for value types by the compiler).

Now you can use Student as a Dictionary key:

This protocol formats a type to string for debug and logging:

Like CustomStringConvertible, but it has a debugDescription, used by debugPrint(), used only in Debug configurations.

It's possible to give constraints on the types used for generics:

It's also possible to specify constraints to extensions:

You can also specify that a type should conform to a protocol only if it meets certain constraints, via conditional conformance:

Optionals are enumerations but also generics: 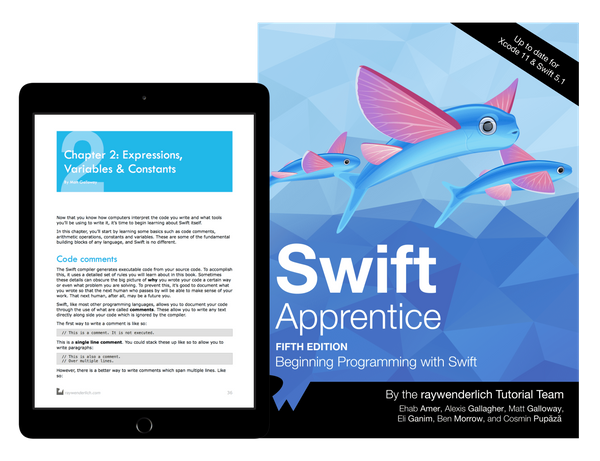 For this series of posts I have used extensively the book Swift Apprentice by Ray Wenderlich. I strongly suggest this book, because if you buy the digital copy, Ray Wenderlich

For this series of posts I have used extensively the book Swift Apprentice by Ray Wenderlich. I strongly suggest this book, because if you buy the digital copy, Ray Wenderlich